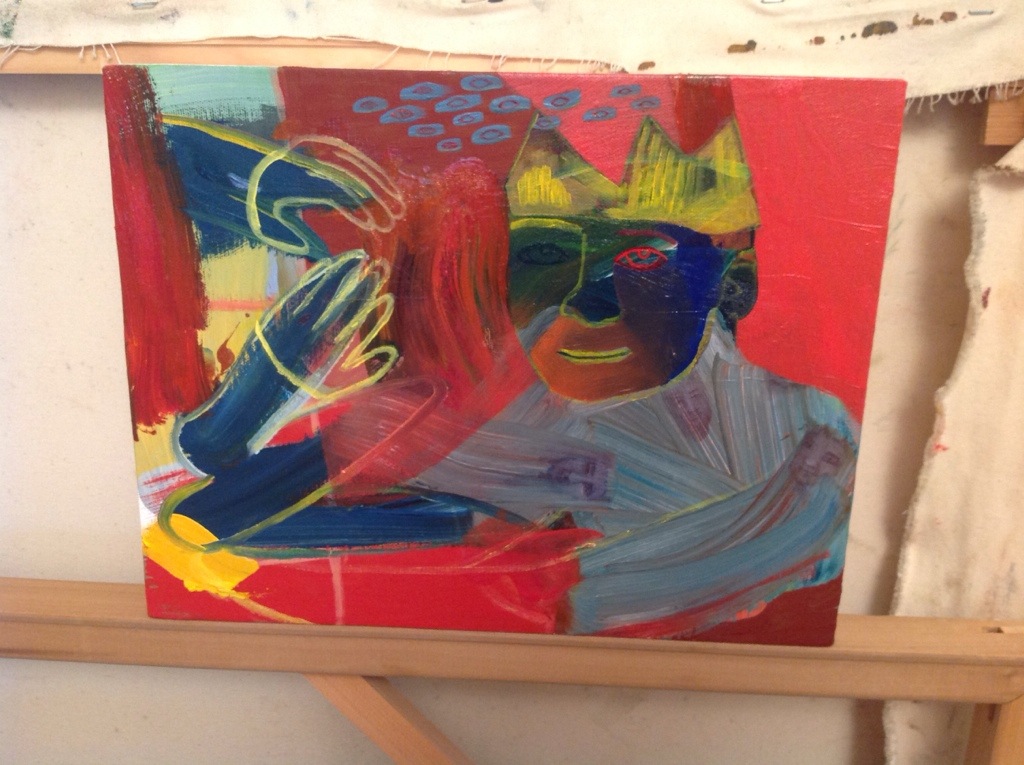 This is one of the last pieces to get the real beginnings of its image.

I got stuck thinking I had made a strange and silly painting of sea snakes. Whenever I looked at it, some internal monitor kept reporting back “Stupid, stupid, stupid.”

Then I pushed that aside, focused, and added some very detailed little faces. And wow, it seemed even worse than before.

So I looked at some of my completed work, reminded myself that I can actually paint, and hit it again. Now it appears to be a king with arms doing something a bit nuts and I am happier. Not because the image makes sense, but because I can feel the piece. Once that is there, the rest is really just following the path, tuning it in.

I still find it embarrassing how often my internal voice places some erroneous negative judgment on my work, and experience doesn’t make this process any easier, but it does make it so I don’t have to wonder if something is wrong with me when it happens. It is just part of the job.

A few years ago I ran into this old TED talk by Elizabeth Gilbert, about applying the Ancient Greek or Roman understanding of genius as an outside entity that inspires you, and I found what she had to say really useful. And funny. Plus she shares the source of the word olé in Spanish.

Similarly inspiring has been my 4-year-old daughter. We have told her not to call other people (or herself) stupid, so she now happily corrects me whenever I aim it at someone, which is usually when we are in the car. She instructs me to call them silly instead. Or says they’re just confused.

Thankfully this lesson resonates for me in the studio so that whenever I start to think something I’ve done is stupid, it bounces back and I think, “Right, right, silly, just confused.” It sounds…well, silly, but it actually helps.

Cognitive behavioral training by toddler. I highly recommend it.